Posted on September 13, 2016 by baudattitude 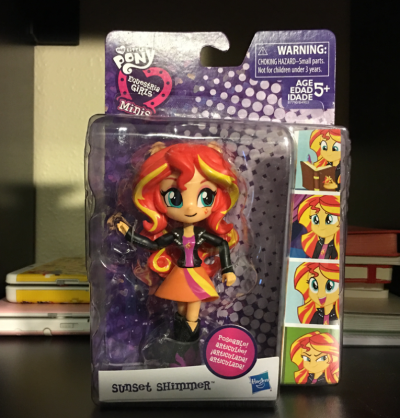 I will not acknowledge any shame for liking the Equestria Girls MLP-spinoff movies.  They’re a pretty naked attempt to get a piece of the fashion doll market by stretching the improbably-popular Friendship Is Magic series to its limits, but they get a pass for being a really fun take on the characters.

Despite the central theme of the show being Friendship – it’s right there in the name! – they really don’t mess around with the “redeemed villain” thing too much.  Most of the show’s Bad Guys are exiled or blown up or sent back to Hades (yes, there is a Pony Hell), and the ones who aren’t are kept on a Very Short Leash by the show’s immortal sun goddess and dictator-for-life.  Sunset is an exception, having been fully integrated into the Canterlot High group, though that may be less a case of keep-your-friends-close and more a case of keep-your-enemies-closer.

Anyway, she’s a fun character and a good 7th to the Mane 6, but she got overlooked in the original wave of Equestria Girls minis and I have been champing at the bit – sorry, couldn’t help myself – waiting for the new wave to come out.

And, well, it did and I bought one.  That’s kind of an anticlimactic way to end this, if I’m honest.

The Twilight had no end of trouble standing upright and Sunset looks like she’s going to have the same problem.  Some sort of stand thing seems in order.