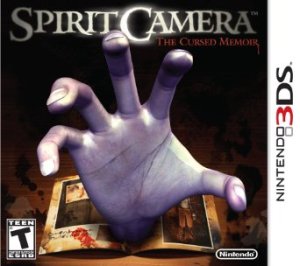 When I originally bought my 3DS, the store I was in didn’t have Kingdom Hearts in stock, and I felt silly leaving without any games, and I’ve always had a fondness for the Fatal Frame games, so I bought Spirit Camera figuring that it looked sort of like a Fatal Frame knockoff and that it might be worth a go.

Turns out, it’s actually NOT a knockoff – it’s a real Fatal Frame game, it just has a different name for some reason.

“Game” might be stretching it a little, too.  It seems mostly designed to show off the features of the 3DS, with the Fatal Frame elements slapped on top to justify charging money for a long-form tech demo.  It pretty much ignores traditional controls – you need to scan the included book of AR cards to advance the story, fighting off spirits is done with the rear-facing cameras, and all aiming and looking around is done by holding your 3DS up in front of you and physically turning and bending and, well, looking rather like an idiot in the process.  I had to clear a good bit of floor space to play this one.

I would DEARLY love to watch someone play this on public transit, which is the normal place one plays portable games.  I think it would be damned entertaining.

Leaving that aside, it does have an interesting premise – for once, the player is NOT a helpless Japanese girl forced into some sort of ancient ritual, but rather is a person who happened to get sucked into an evil diary ALONGSIDE a helpless Japanese girl who has been forced into some sort of ancient ritual.  You just happen to have a Camera Obscura, and your new friend Maya seizes upon you as someone who might be able to break a curse that she happens to be suffering from and, oh dear, you seem to be suffering from it now too.  Whoops?

The AR stuff also works pretty well, and it even manages to pull off a couple of jump scares.  It’s perfectly instinctive to, if you see stuff dripping on to a book in front of you – and when I say “you”, I mean “you, the human being playing this game” – to look up, bringing the 3DS with you as you look up, and having a creepy ghost kid jump out of your own ceiling at you is, well, a good scare.

Headphones mandatory of course, this would have basically zero impact through the 3DS speakers.  Really, enjoyment of this game is probably directly correlated to the player’s ability to suspend disbelief and to accept the world seen through the 3DS screen as the actual state of the world…

…for about three hours, which is a bit short for a game that was originally sold at full retail price.  There’s an “Extra” story mode unlocked after your first play-through, at least, and (to be ABSOLUTELY fair) holding a 3DS up in front of your face for “only” three hours straight is a bit of an endurance test in itself, so it’s probably a good thing that it’s not a full-length Fatal Frame game, which tend to be more in the 8 to 10 hour range.

Overall, probably nothing I’d recommend to anyone who wasn’t a fan of the Fatal Frame series in the first place, but a fun side story at least.