Well, I’m not a scary watch guy who reads Watches Monthly and hangs out on watch forums and writes angry letters to the editor re: kids today and their cell phones and their rap music and their need to get off my lawn, but I am a watch guy in that I wear watches and feel weird if there’s not something on my left wrist.

So, when I was getting ready to leave the country for two weeks, it was really bad timing for me to drop my watch and have it explode into three separate pieces.  With Movados, you can’t just squeeze the back on with finger pressure, it takes a special vise thing.  It also means that there’s only one store in my town where I can go if I need a new battery, but I like the guy who runs it so that’s OK.

There was absolutely no way to get to him before leaving, so I was left with putting the watch in a Ziploc(R) bag and heading to the airport with no watch.

There is a special kind of twitchiness that comes when you’re used to having a watch on and suddenly do not have a watch any more, and I lasted about three days before I broke down and bought a cheap and presumably unlicensed Hatsune Miku-themed watch.  It had a cute face with musical notes at the 12, 3, 6, and 9 positions, and it told time, and that’s all I needed.  It wasn’t very manly, and the cream-colored vinyl band wasn’t helping things any in that regard, but it just had to last me a couple of weeks.

The band very nearly disintegrated in just that time.  It was REALLY cheap.

On returning to the states, I took my Real Watch in to have the bits reassembled, and the shop was polite enough to do it for free, and then I realized that watches are actually modular and you can replace the band and I was in a store that presumably stocked other bands…

Yes, I realize that this is a really dumb epiphany to have.  I’ve just never had occasion to replace a watch band before.

At any rate, a new stainless steel band was about twenty bucks, which was more than the watch itself had originally cost, but now I have the world’s stealthiest Hatsune Miku watch. 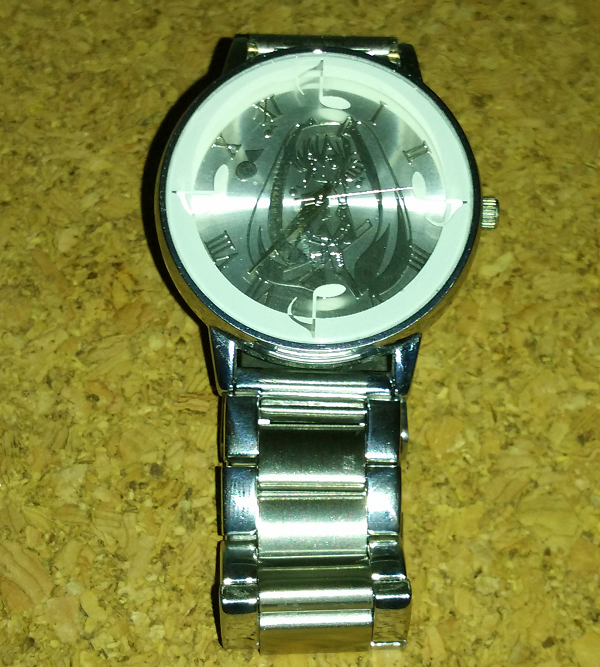