In Which, I Am Forced to Accept Defeat

I didn’t have many things in mind to buy when I went to China. I wanted to get the Xiaomi Mi4 so that I could put Windows Phone 10 on it when it became available, and that wasn’t too hard to come by. I may put something up on here about that later, but there’s not too much to talk about yet.

The other thing I wanted was a poster from the 1960s that I fell in love with during a Chinese Art History course I took back in sophomore year.

It’s both a really pretty poster and surprisingly dark, because the message is “look at all this food I am harvesting, all this tasty food!”, and the country was actually in the middle of a famine of epic proportions, mostly because of that wacky Mao guy and his dislike of birds.

That is simplifying things a bit, I realize.

Anyway, they printed over a million of them, presumably because people would take pictures of delicious food even if they couldn’t have the real thing, so I figured it wouldn’t be that hard to find a vintage poster or modern reprint. It turns out that most propaganda posters got destroyed in the 1970s, either because they were no longer PC or for paper recycling drives, so it turned into quite a frustrating quest.

Eventually my search took me to the Panjiayuan “dirt market” in Beijing. This is part flea market, part crafts fair, part actual shops. The actual, established shops surround the part-time vendors, who all get to lay out their wares for sale in temporary stalls or on blankets. 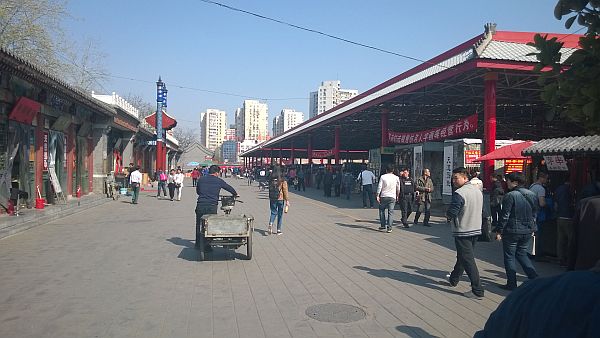 As a guy who used to be a craft fair vendor in my teens, I have a lot of sympathy for the poor schmucks in the cheap seats. They’re the ones trying to sell cheap jade, amber and malachite carvings, fake antique coins and assorted other cheesy junk, and they’re the ones who are going to be bundling up 95% of their wares at the end of the night and trying again the next day.

The established shops have the Serious Jade and Ivory carvings (with, to give them credit, very large signs pointing out that what they’re selling is mammoth ivory), paintings, antique furniture, and – finally – a huge number of shops selling vintage posters.

I even found the poster I’d come looking for, only to find that the vendor wanted CNY4000, or about $640, and was not in the mood to talk price. So… That one is going to stay on my Things I Will Not Own list.

I went back to browsing the vendor stalls, vaguely looking for a magatama in some sort of stone. Did not find any, despite there being carved stone of virtually every other shape and size – even one lovingly crafted jade “marital aid” that goes down next to J-List’s moon wands as being an unexpected material for that sort of thing –  vaguely considered getting a random hunk of malachite to commemorate my days playing an EQ mage, and eventually left empty-handed.

Still, a fascinating place to browse knick-knacks.  Also, if you have much deeper pockets than me and a taste for vintage posters, this was the only place I was able to find them.