So, I created an account with Big Fish Games in order to buy a game that my wife recommended to me.

As an aside, it appears that all traces of shame have finally been scrubbed from me if I’m a man admitting to having a Big Fish Games account.  The 20+ My Little Pony figurines staring at me from above my monitor would agree.

They have a clever sales hook that they hit you with after you make a purchase.  You get a pop-up window telling you that, for the next five minutes, you can get a sizable discount on another one of their games.  Presumably, if you bite on the offered deal, you get another pop-up and so on and so forth.

I can’t prove any of this, of course, and I actually don’t take exception at the idea.  Obviously you’re buying something already and you might be in the mood to buy another game to go with the first one.

What I do take exception with is poor math skills: 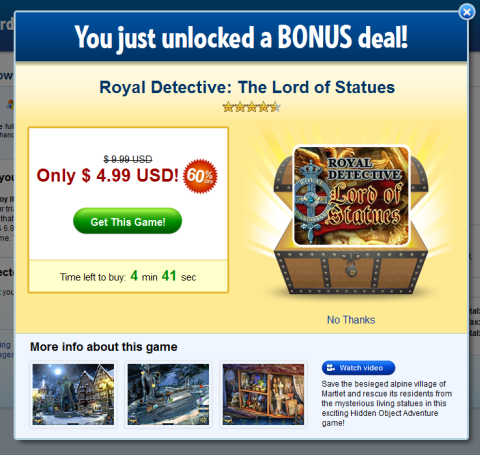 Anyway, the game I downloaded and will be giving a try to was “Skyborn“, which looks like a fun riff on Ye Auld 16-Bit RPG, with nice large character art added and so forth.   More as I actually play the thing.