In which, I take a shameless Korean MMO a little more seriously

Yesterday, I wrote about playing Scarlet Blade with the intention of writing a snarky review about what it said about us and how far we had fallen as a species and so on.  That was a good post, I thought, and you should go read it before continuing on with this one.

Today, I’m actually going to write a bit more about the game, but this time I’ll be taking it a little more seriously.  As before, however, it all goes below the MORE link because dear god this game is not safe for work in any way.

As I mentioned in my last post, I created two different characters when I was doing my initial note-taking.  The first was ingloriously knocked back to level 1 as the result of a server rollback and the second was created with a couple of clicks on the “randomize features” button on the character creation screen.  When I decided to take the game a little more seriously, I also decided to create a third character, spend a little more time choosing a class and how the character looked, and make a good-faith attempt at playing the game instead of focusing on the art assets.

Oh COME ON, let me have that one.

Thus was born a “defender”, as opposed to the “whipper” that I’d tried first.  As the name implies, it’s the game’s primary tank class, and actually dresses quite modestly by Scarlet Blade standards.  Here she is at roughly level 10 with her first set of quest armor on:

This VAGUE concession to modesty is thrown completely out the window with the level 15 gear, mind you: 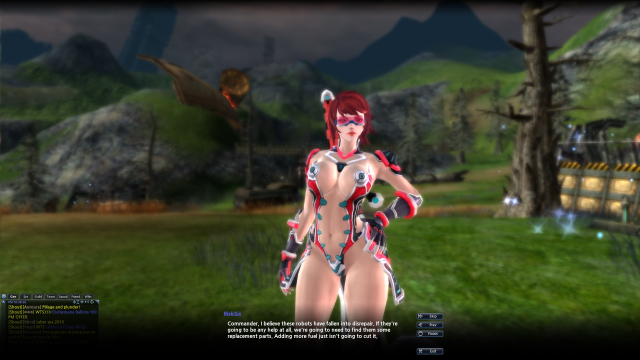 …nonetheless, by this time I’d invested three hours into the character and figured I’d keep going.

Most MMOs, barring EVE, are high fantasy sorts of affairs, with dragons and wizards aplenty.  This isn’t such a bad thing, really, and I’ve had plenty of fun playing high fantasy MMOs.

Scarlet Blade scratches a similar-but-entirely-different itch: the post-apocalyptic fantasy MMO, mixing low-tech swordplay with high-tech motorcycles and the occasional laser pistol.  If you ever played Gamma World or Phantasy Star, this may appeal to you.  For my part, it pushes every single button that makes me go SQUEE.

Here are some landscape shots from the introductory area.  Ruined cities in the distance, dark swamps full of mutant frogs, mysterious glowy jellyfish things floating in the sky… 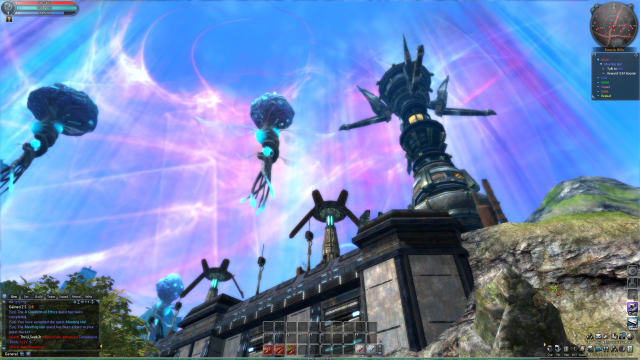 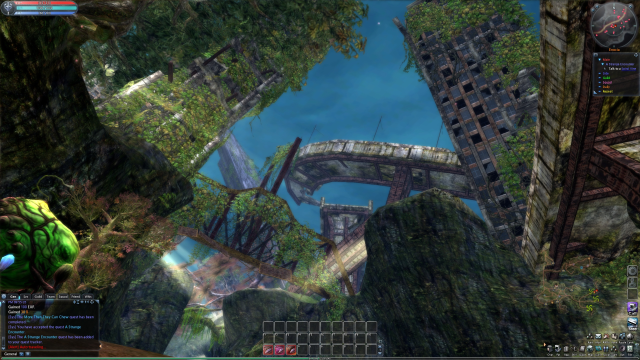 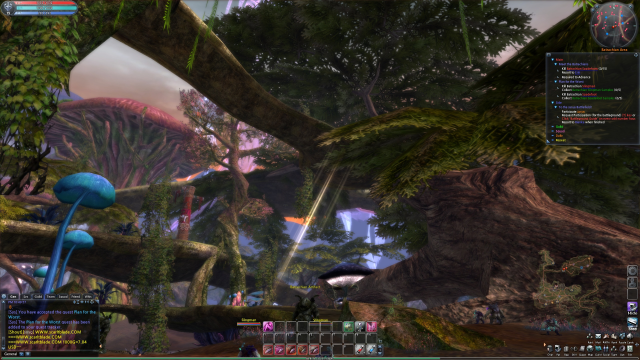 The post-apocalyptic setting is also justification for why every PC character is so hopelessly non-PC.  It’s not that you’re playing as a miracle of plastic surgery and improbable genetics, you’re a sort of android hybrid thing and they couldn’t make any male ones for some reason.  There ARE males in the game, they’re just all NPCs.

The first ten levels take an hour to ninety minutes to introduce you to the world and how to move around and kill things.  You’re then taken through a dungeon, and finally dropped off at the first big quest hub and given a motorcycle to make getting around the world a little quicker.   More on motorcycles later.

In a rather unique twist, you don’t actually get a single point of experience for killing any of the creatures you need to kill to finish these introductory quests.  Until level 10, and until you enter that first dungeon, you get all of your XP from quest completion.  This results in a very smooth pace, and you’ll generally be getting your first set of gear exactly as you hit the level required to equip it.  It means that there’s no benefit to hanging around the newbie area any longer than absolutely necessary and it means that everything must be balanced so that you can kill it without extra grinding.  It also helps that everything you fight below level 10 is non-aggressive, so any extra fights you pick are your own doing.

There are a couple of slight hitches, where you get quests where you are sent to get widgets from creatures and the widgets aren’t every-time drops.  I can forgive that, and I give the newbie experience two thumbs up.

There are, of course, two factions because there are ALWAYS two factions.  The “edgy” faction outnumbers the “goody two-shoes” faction by about a 60-40 split on my server, which isn’t too surprising.  The newbie areas for both are identical.  If you plan to do the hourly PVP events and don’t want to get stuck in a queue, pick the goody two-shoes side.

Once you get past the newbie area, you start getting more quests thrown at you.  Generally, these are kill-10-rats sorts of quests, but there’s usually SOME reason for why you’re being asked to go and kill 10 rats, and honestly the game’s setting is one of the few things it has going for it so I’d recommend actually reading the quest text.  You don’t have to, of course.

You also don’t have to pay too much attention to directions, because simply clicking on the word “Rats” in “kill 10 rats” sends your character zooming across the map on her motorcycle to the place where you can find rats to kill 10 of, although – and this ought to be noted – she’s not too good about avoiding hostile NPCs in the process so you may take a few hits along the way.  This is very similar to Lucent Heart and I suspect it’s a common thing in these sorts of MMOs.  It’s very handy anyway.

Speaking of motorcycles, I said I was going to get back to those.  At level 10, you get an introductory motorcycle.  There are, of course, much better ones available in the cash shop, but you can upgrade it and it’s pretty neat as far as free mounts go in MMOs: 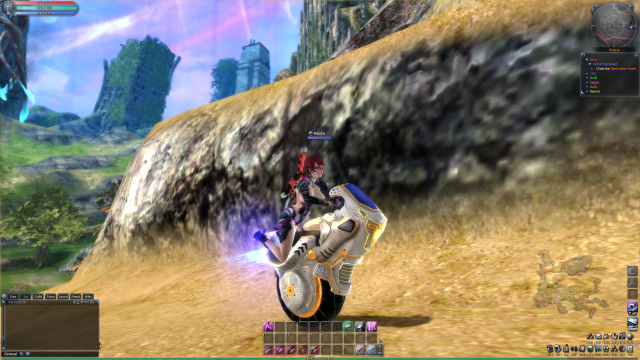 Of course, you tend to see it from an entirely different angle:

Oh, Korea.  What are we going to do with you?

You also get a mecha suit.

YES YOU GET TO STOMP AROUND IN A GIANT* ROBOT 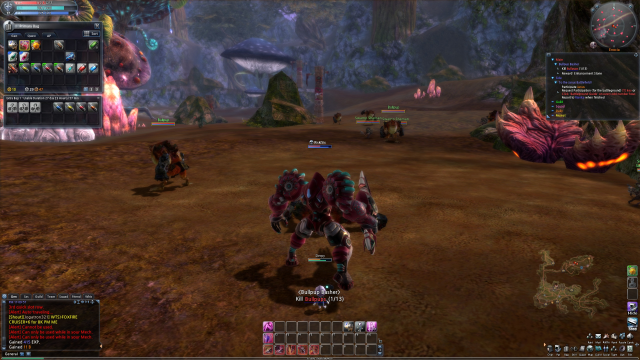 * Giant in this case is “about twice your normal height”, so more Landmate than Labor, but I will take it.

I can’t say too much about the leveling experience other than that it’s a pretty standard affair of running all over the world at the beck and call of various NPCs, collecting body parts from the local wildlife.  You may at some point wish that the various NPCs had gotten together and written up complete lists of all the body parts they would like, because there’s a real tendency for one NPC to say, oh, “get me 10 wolf pelts”, which you go and collect and return to him, at which point the NPC next to that guy says “hey, could you get me 10 wolf teeth? thanks” and you’re back at the wolves again.

Pacing is a little slow because mana and health regen are slower than normal for a recent MMO.  It’s not EQ1 levels of needing to sit on your butt and wait, but you will occasionally need to sit down or use health and mana potions.

Amusingly enough, while you get “Sit” as a skill from the get-go, you need to get “Sit II” and “Sit III” from random monster drops.  Learning these skills lets you sit, well, better and improves your health and mana regen rates while sitting.

The level cap is 34, which is pretty low.  The XP cliff – where suddenly you go from getting a couple of levels every hour to spending a couple of hours for each level – kicks in right around level 22, so you could probably play one of each class up to level 20 in a day or three before making your final decision on which one you wanted to play seriously.

Starting from level 15, there’s a pretty heavy emphasis on PVP.  You can probably level to 30 without stepping into a PVP-allowed zone, but the big two end-game zones are both PVP enabled.  There are also regular battleground-style events which I have quite liked so far, mostly because I – as a tank – am awarded participation points for TAKING damage instead of dealing it out.  I am TERRIBLE at PVP, so I regularly top the “participation” score in these things just from dying a lot.  PVP XP is also quite helpful in finishing out the parts of levels where you don’t have quite enough quests to take you to the next level, so I recommend doing the battlegrounds.

Now, the bottom-line part of things:  This is a free-to-play Asian MMO with an endgame based on PVP.  Of course it has a cash shop, and you had better believe that spending more money in the cash shop will make you a more efficient killing machine.  There are some items that are there for convenience, and some items for cosmetics, but a lot of the shop is selling you items to upgrade your dropped gear pieces.

Some of the prices are also absolutely ABSURD, there are tons of “lucky boxes” where buying the box gives you a 1% chance at something cool and a 99% chance of something not cool, and some of the cosmetics are handed out as incentives for spending ridiculous amounts of cash.  This last weekend, for example, featured a pirate outfit that could only be acquired by spending $300 in the cash shop in a single weekend.

So, yes, it’s pretty blatantly pay to win.  It’s not, however, pay to have fun – I have gotten up to level 25 now, and my purchases have amounted to roughly five bucks worth of convenience items. (I bought a pet that loots for me so I don’t need to actually loot monsters myself.)

Oh, and level 25 meant that I FINALLY got a little better coverage in the battle-bikini department: 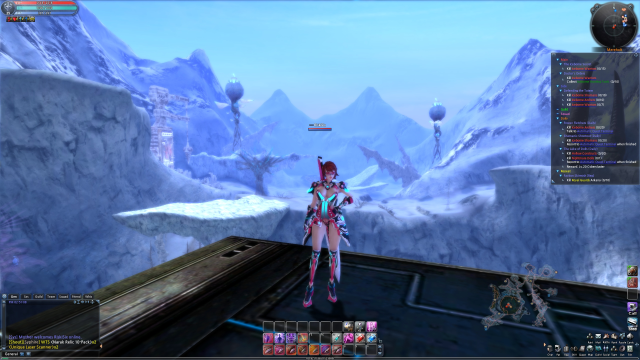 …by the standards of this game, that’s practically an ankle-length gown, so it’s an improvement.  I have a SKIRT now, not just a thong.

It’s not going to be a long-haul sort of game.  It’s a play-for-a-couple-of-weeks game, and for that it is remarkably good.  The bounce-and-giggle nature of the character designs aside, there’s an enjoyable game here.