I’ve spent the intervening 13 years playing various MMORPGs and avoiding PvP servers all the way.  I did get rather into Rift’s battleground things, but those were rather more like soccer matches with swords than “real” PvP, really.

For the love of God, I even played on the “Geharis” server in Dark Age of Camelot, the SINGLE server that game had that wasn’t a PvP server.

The whole time, though, PvP servers have had a little bit of a mystique.  PvP players always had a bit of a swagger to them, throwing around terms like “carebear” and “bluebie” to divide the world into Real Men and People Who Played On PvE Servers, and I’ve always wondered – could I make it in a PvP environment?  Could I manage to dodge hostile players while questing and leveling and all the other sorts of things you do in an MMO?  What would the world be like, with that extra bit of spice, that elusive drug known as Open World PVP?

That lead to me deciding, last Sunday, that I would make a character on Tera’s “Valley of Titans” server (reputedly, the single largest Wretched Hive Of Scum And Villainy in the Tera world), that I would play for ONE HOUR, and that I would keep a log of every time I got killed during that hour, what level the person killing me was, and how quickly I went splut.  I’d then log off, write up a quick post about it, and generally feel good about finally braving the PvP world.

Thus was born Riski, the Elin Berserker.  I figured I’d go with a Race/Class combination that I’d gotten familiar with.

It quickly turned out that my initial plan wasn’t going to work.  New players in Tera, even on PvP servers, are shielded from PvP until level 11.  They’re also safe as long as they stay on the newbie island or in any city or outpost.  I was going to have to level up if I wanted to get ganked.

12:07 (just shy of 2 hours after starting): I reach level 11 and can finally engage in PvP combat.  Also I was an adorable disco squirrel by this point, having picked up this particular outfit at around level 10: 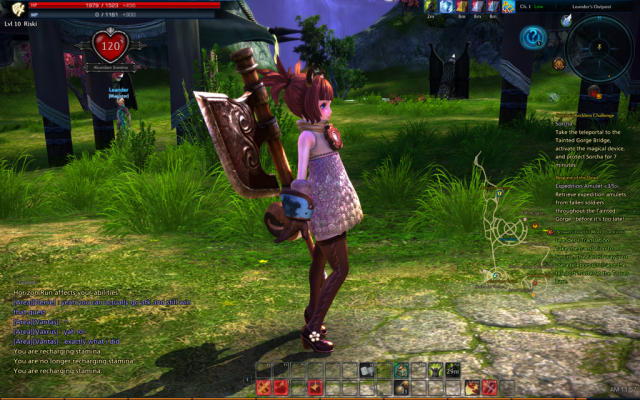 I still had a couple of quick quests to finish up, though.

12:18:  I leave the newbie island and arrive at the first major city.  I get some quests that I didn’t get on a PvE server.  One teaches me about dueling and the other gives me a skill to flag myself an “outlaw”, able to attack other players without their consent.  Finally I feel like I’m actually ON a PvP server.

12:31: I leave the first major city and am finally in the wilderness, where anyone flagged as an outlaw can attack me freely.

I log out and speculate about this.  Well, I think to myself, it IS Sunday.  Perhaps it’s a gank holiday.

I describe my predicament to my wife.  She groans at the “gank holiday” joke and I am pleased.

The next evening, I log in at 9:28.  Perhaps the late night crowd will be more prone to attacking cute, defenseless squirrel girls.

at 10:08, I’m in the middle of fighting a creature when FINALLY someone shoots me with an arrow.  Their first shot takes off a good 20% of my life, and their second knocks me down almost as much again.  I spin and face them – they’re a level 23 character, 7 levels above me.  I am DEAD MEAT.

I charge them anyway, because what else was I going to do?

A level 17 character sees this and decides to join in the chase.  Mr. Level 23 archer sprints back towards the nearest town and safe zone, so we can’t touch him.  Back to questing, though I am newly invigorated.  I have finally had someone at least make a token effort to gank me.

10:45.  Level 17.  While running around, I pass a person, about my level, flagged for PvP.  I stop and turn back, wondering if I should go and start something.

I waited too long.  He had already been jumped and killed by a couple of other players.

Tuesday night, at 6:44, I log back in.  My new goal is to get to level 20 and run a dungeon that I missed when I was leveling my first character in the safe refuge of a PvE server, if I can possibly make it to level 20 in a world crawling with PKs just looking to cut another notch in the hilt of their sword.

There is just a little sarcasm there.

I look even more adorable by this point and have actually graduated from chain armor to plate: 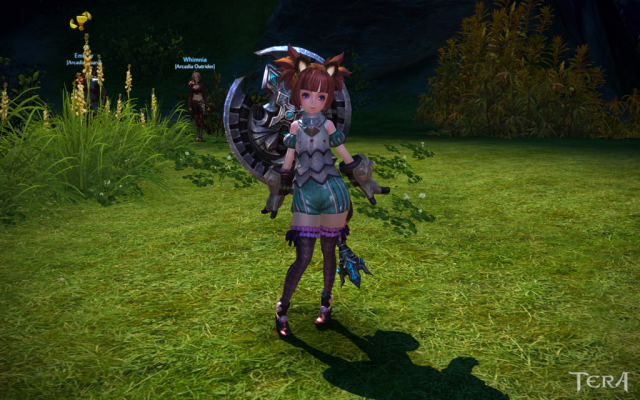 At level 21, I queue for Bastion of Lok, the lowest level dungeon in Tera.  7 minutes later, I get a group and we merrily set about clearing the dungeon.

Shortly after 9:30, we’re done and I’ve gotten level 22 without a single death to player OR monster.  I did get a new breastplate and axe from the dungeon, which I cheerfully put on even though I’m not ever planning to come back to this particular server.  My final, most adorable state looked like this:

So, to sum up:  I played on a PvP server for about 8 hours and was eligible to be attacked for 5 of those.  I traveled openly, following roads, and went into safe zones only for as long as I needed to to pick up quests and sell my accumulated loot.  The worst thing that happened during that time was one guy sticking a couple of arrows in me and then running instead of finishing me off.  Heck, even the general chat channels, as full of testosterone as they were, were actually LESS annoying than the general channels on my PvE server.

At this point, you should actually be able to HEAR the sound of my illusions being shattered.

I’m tempted to log back in, set myself dancing in the middle of a busy intersection in the forest, far from safe zones, and walk away from the computer for a bit.  The only thing stopping me, really, is that it would be terribly, terribly depressing if I came back an hour later and was still dancing there.