I may have finally cracked an organizational problem.

I don’t think much screams “first world problems” quite as much as the horrible problem of not knowing exactly what movies you own and in which formats.  That having been said…

I like my AppleTV a lot.  It’s an unassuming little box that sits near the TV and does its job of playing back all the stuff I’ve bought off the iTunes store and all the other stuff that I’ve wrangled into formats that it will actually play back.  Honestly, it’s kind of a pain how limited the thing is in terms of codecs and the like, but it’s the only game in town for iTunes files so I’m making the best of things.

Anyway, that gives me instant access to SOME of my video collection, which is awfully handy, but I still have a few hundred movies on DVD and Blu-Ray and in video files that it can’t play back, which leads to some issues sometimes trying to figure out where a movie is and of course makes it tricky sometimes to decide what to watch.  Stuff gets forgotten.

I’ve tried various methods of sorting this out, and they’ve never worked very well, but I think I’ve finally hit on a good one.

Basically, I took a small video file which old laserdisc fans may recognize, found some appropriate art to represent a couple different forms of media, tagged the video file with the art, lugged my laptop over to the DVD shelves and started making lots and lots of copies of the video file.

The end result looks like this in iTunes.  It’s slightly less useful on the AppleTV itself as there’s no grid view there but it still works nicely to be able to scroll down the list of movies and go “oh, I have this movie on disc, I should go over to the shelf and grab it” when I see a DVD or BD icon, or know that I can just hit play if I see a poster.  If I see the server-looking icon, it means that I need to boot the XBMC box hooked up to the same TV and play it from there.  Most of those are subtitled movies – I still haven’t gotten the knack of burning .srt files into video to play back on the AppleTV. 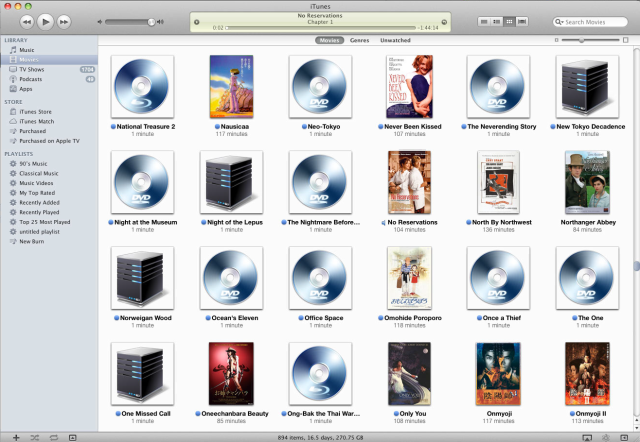 Also, since I’ve been ripping DVDs kind of off-and-on over the last couple of years, with no real system for knowing what I have and haven’t ripped, this gives me a convenient visual guide for knowing what kind of progress I’ve made and what I still have to do.

For the record, I have about 600 DVDs left to rip, just in Movies.  If I decide to rip all of the TV box sets, that’s probably twice the number, and anime will count for another thousand DVDs or so.

That may take a little while 🙂

Anyway, time will tell if this method sticks, but for now I’m pretty happy with it.