I don’t pay a lot of attention to the things that get us through our lives.  Take television, for example – I don’t see television as anything all that amazing, though there must have been a time when television stations were being set up in cities all over the US and huge transmitters were being built and hauled to the tops of remote hills to broadcast programs and an entire distribution system was created to produce the shows and get them out to TV stations and so on and so forth.

By the time I was born, TV was just “something that was there”.

Another one of those things that’s “just there” is the common computer hard drive.  Let’s think about that for a second.  You can buy hard drives right now that store three terabytes of information – that’s three trillion bytes of information, multiply by eight for bits, and it’s all stored in the form of imperceptibly faint magnetic signals on tiny metal platters that are just about the smoothest things in existence – they have to be that smooth because the read/write heads that access all this data don’t actually touch the surface of the drive; they float above it on a cushion of air measured in nanometers, and in order to play you back a video of a cat jumping into a box and falling over they need to be able to find each and every single bit of data on the surface of a disk that is rotating 120 times a SECOND and keeps spinning at that speed hour after hour, day after day, as long as it’s needed.  I’ve taken twenty-year-old hard drives and put them back into service and they’ve come right up, their capacities laughably small by today’s standards but as ready as ever to serve.

The technology needed to make mechanical devices move that precisely and the physics involved in actually being able to store that much information are mind-boggling; I can’t even fathom what goes through the minds of the people who design these things.

On the other hand, hard drives can be risky things.  We put so much of our lives on to them, and when it’s invariably time to move on and get a bigger drive or a newer computer, that information is still on those drives.

So, one of my projects at work last week was to wipe a bunch of decommissioned drives so they couldn’t be read.  It’s pretty tedious work – basically you hook up a drive to a computer and start a piece of software that runs for several hours and then you do it again with the next drive – but it did have one redeeming feature: 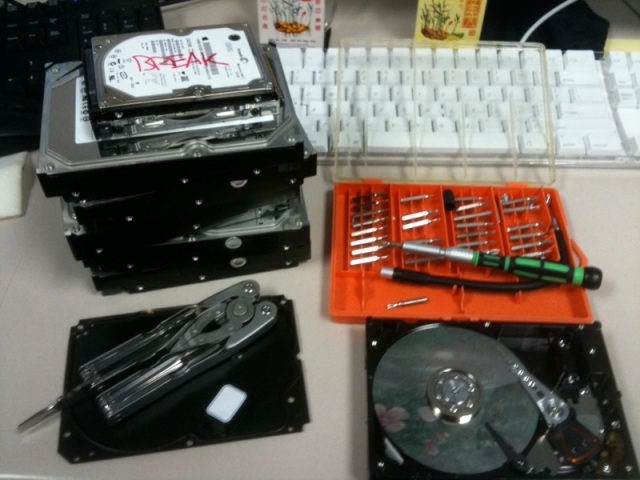 And let me tell you, engineering marvels or not, amazing pieces of technology that I take for granted and will never understand fully or not, it’s occasionally fun just to let the inner luddite out and break things.

1 Response to Destroying Something Beautiful