Over the years, I’ve occasionally seen the question “Is Anime art?” and I’ve always stayed well away from it because the people arguing both for and against the concept were generally scary people who were taking things Just A Little Seriously.

But, one of the films I’ve often seen used as an argument on the “Yup, it’s art” side of the fight is Angel’s Egg, so I’ve been a little bit curious about it for many years.  I’d never seen it because it was never subtitled back in the days when I was actively trading VHS tapes with other fans, and I’d heard that it was quite difficult to understand and assumed that that was because it was full of really hard to follow Japanese dialogue.

So, when I found a fansub online – from 2004, mind you, so it’s been available a while – I figured that I would finally be able to sit down, watch me some Angel’s Egg, and understand what it was all about at the same time as feeling Good About Myself for watching something Artistic that didn’t involve jubblies.

Turns out, I’ve been wrong all these years.  There’s maybe a dozen lines of dialogue – and one longish monologue – in the entire film.  Language is no barrier to comprehension, which is good and bad.  It’s good because I don’t have to wonder “did that make any sense?” because the answer is No, but it’s bad because it no longer serves to hide the fact that no, it didn’t make any sense.  There’s a girl, and she’s carrying around an egg, and she meets a guy, and he breaks the egg, and then she dies and suddenly there’s a lot of eggs and there’s a bit that kind of looks like the human farms from “The Matrix” , and then there’s a long pan back shot to space and then the end credits rolled and woke me up and I rewound twenty minutes to watch the ending again. 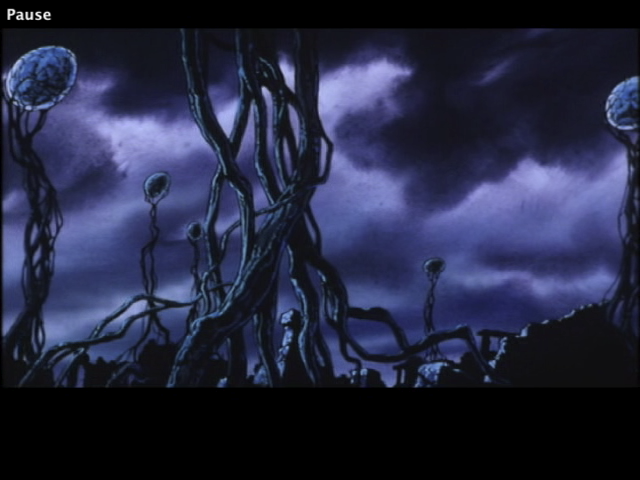 It’s awfully pretty, for 1985 anyway.  It doesn’t hold up against modern animation, but looking at some of the closeups of the main character and really thinking about how difficult they must have been to animate really brings home the concept that this was a piece of anime that took a lot of work.

Seriously.  Imagine animating each and every one of those strands of hair as they change position – ever so slightly – from frame to frame.  Yoshitaka Amano designs are best suited for stills.

Anyway, I’ve watched it now, and I think it’s probably Art, for whatever that’s worth, and I feel good about having satisfied my curiosity, but it’s REALLY reinforced the notion that Mamoru Oshii movies are best when he’s working in an established universe, like with his Urusei Yatsura and Patlabor movies.