In which, I sample the delights of the former Eastern Bloc.

Posted on February 6, 2010 by baudattitude

A week or so ago, I ordered a hard drive enclosure from Newegg.  This is a perfectly normal transaction, and nothing worthy of comment really.

Problem is, I’d never updated my address with Newegg.  I didn’t realize this until the day it was delivered, however, when I looked at the UPS tracking page and saw “Delivered: Portland, OR”

And I cursed a bit.

Fortunately, when I called my old apartment building, they were willing to put the package aside for me and not hand it over to the current residents of the apartment, who presumably don’t need any hard drive enclosures.

Then I just had to drive two hours to go and pick it up, which meant that I was going to be in the Portland area anyway, which meant that I could do stuff like shopping at Uwajimaya and H-Mart and Fry’s Electronics and having lunch at Marinepolis in Beaverton.

So I guess it wasn’t a total loss of a day.

Anyway, last term in Japanese class – and I promise this is all leading somewhere – I was in a small group project team with a woman from the Ukraine.  As a side note, this is the single unluckiest student in the world, because her last name happens to be one of the most vulgar words in Japanese slang and I am constantly torn between finding a way to subtly warn her and being afraid to mention it lest she already know.

At this point, you have all gotten entirely the wrong idea about what the title of this blog post refers to.

Anyway, when we were working on our project together, she’d mentioned that she really missed, of all things, candy from her home country, and I remembered while I was having sushi that there was a European market and deli in the same shopping complex as the sushi place, so I decided that I would go there and get their business card to pass on to her so she could potentially get her fix of the taste of home.

I didn’t, you know, pick her up any snacks, because that might have been inappropriate and I’m a cheap bastard and to be honest I don’t know how to tell Russian candy from Ukranian candy and I think I might get beaten up if I made a mistake there.

On the other hand, I wasn’t going to leave empty-handed, so I browsed the snacks & candy selection until I found a few things that looked promising, and bought them: 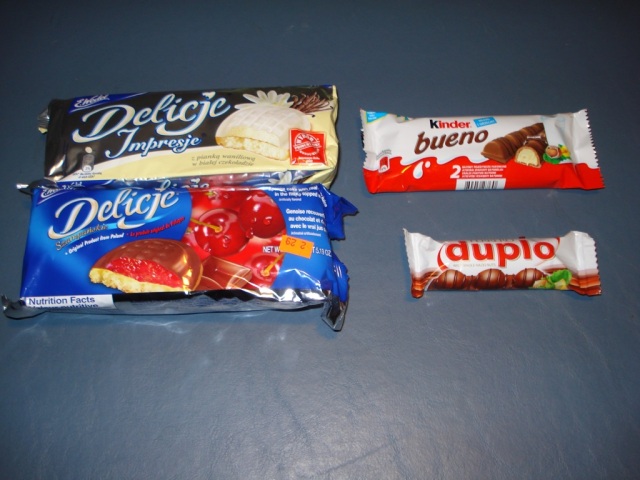 Basically, I wound up with two packages of cookies from Poland and two candy bars.  The largest is also Polish, the smaller is from Tomislavgrad, a city in the Federation of Bosnia and Herzegovina, which Wikipedia tells me is one of two political entities that comprise the nation of Bosnia and Herzegovina, which Wikipedia then tells me is one of six former Federal units of the former Yugoslavia.

Let me get one thing straight:  That second candy bar there is the single most educational piece of candy I have ever purchased.

Anyway, I’m saving the chocolate for another day because I suspect it’s going to be pretty similar to chocolate from pretty much any country in the world.  That is to say, any country outside of the US, because the rest of the world considers our chocolate to be one step above brown candle wax and I’m hard pressed to fault them on this topic considering news stories like this one.

In adherence to the universal laws of snack food, they looked a little better on the package than they did once I’d gotten them out: 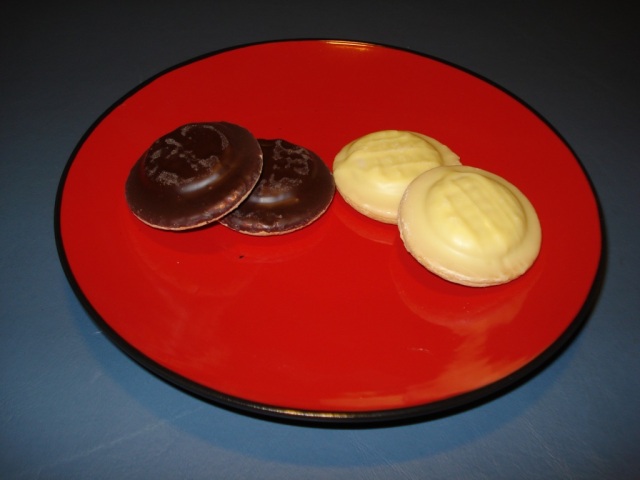 The vanilla, I’m sad to report, was nothing extraordinary.  It didn’t seem worth the trouble that had been taken to ship it all the way from Poland to Portland.  I suspect that any Polish expatriate needing a fix of vanilla-flavored “Delicje Impresie” would be well served by any number of vanilla cookies available in the United States.  Let me be clear – it was good, it just wasn’t exotic.  I expected more from the 9th largest country in Europe.

Again, thank you Wikipedia for turning this into an educational experience.

The cherry, however, was really good.  It was almost exactly the flavor of black forest cake, or Schwarzwälder Kirschtorte, the traditional dessert from southern Germany.

And thank you again Wikipedia.

Now, I don’t know your personal views on Schwarzwälder Kirschtorte, but speaking only for myself I’m a big fan.  So having it in cookie form is a Big Win, and I now have a generally favorable view of Poland and each and every one of its 38,130,302 (estimated) inhabitants.