OK, OK, photos of weird Japanese fast food aren’t that exciting.  I’ll try not to do this too often.

But it snowed yesterday.  It’s bloody cold.  I cannot be faulted for looking through vacation photos from August in an effort to remember what summer feels like.

On this particular day, I was at the Decks shopping mall on Odaiba, looking for souvenirs for the folks back home.  I’d just survived the third day of Comiket,  I’d been walking a lot, and I was kind of worn down – if I was going to get any souvenir shopping accomplished, I needed food.

It says “Go to Monster Burger!”, by the way.

I looked at the sign.  I said, unto myself, “Yes!  I will go to Monster Burger!”

This was actually a pain in the arse to find.  It turns out that they’ve turned one floor of Decks into… into… well, kind of a “fitness themed” amusement center called Muscle Park, with all kinds of activities that try to be healthy and good for you…And then they stick a massively unhealthy fast food place into the middle of it. 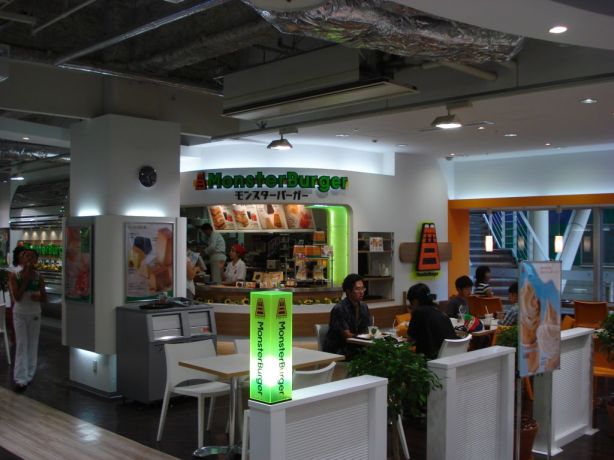 After you’ve enjoyed the exercise-themed fun of Muscle Park, why not relax with a Monster Burger?  And maybe some soft serve ice cream?  And cake?

I ordered myself a Monster Burger “Set” meal, with “Potato” and “Calpis Soda”, and took a window seat.  A few minutes later, a happy Japanese fast-food employee came up to me and deposited this in front of me.

Now, Y1630 is about 15 bucks.  That’s pretty expensive for fast food, and actually more expensive than some family dining places.  But at a family diner, you don’t get your food in a MONSTER BOX, now do you?

As an aside, the Monster Box – and the cakes they sell – are shaped like a piece of Japanese gym equipment.  Just to keep the fitness theme going, see?

All pretext of fitness goes away when you open your Monster Box: 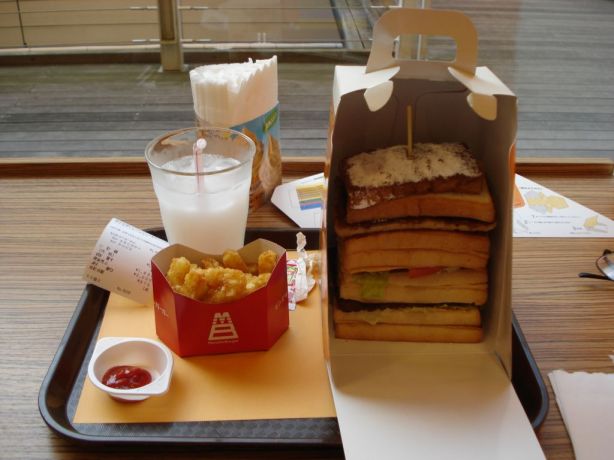 I actually had a couple of doubts about this at this point.  The thing was far too tall to pick up and eat… and for some reason it had powdered sugar on top.

It took me a minute to realize that you could take the wooden skewer out, and when you did so, it separated into:

1) Dessert.  That being the bit with powdered sugar on it.

2) A chicken sandwich.  That being the next layer down.

3) A salad sandwich.  Yes, lettuce and so on in a hamburger bun.

5) Another layer which was just another bottom hamburger bun.

The whole thing was actually kind of nasty to eat.  I managed to finish off the three “food” burgers, but the dessert – and the inexplicable extra bun – were just beyond me.

You’ve got to eat that damn burger and pretend to smile.

Because that’s what a guy’s got to do.

This one post gets as much traffic as the rest of the blog put together, and I can tell by the site numbers that someone out there linked to it again.

Here are some other posts about Japanese fast food, if this one didn’t make you queasy enough. 🙂