PC gaming can be a tremendously frustrating hobby at times, but one of the joys that it has to offer is the occasional excuse to pick up a screwdriver, clear off the crud that seems to accumulate on my workbench whenever I’m not looking, and get up to my elbows in the guts of my computer.

Today’s project was kind of a weird one.  I have been using a Phanteks Enthoo Pro case for a while now, and it is a REALLY good case if you want a full tower with lots of room for hard drives and optical drives and with plenty of room to work in.  It’s also got superb cable management and a power supply shroud thing that makes everything look very neat inside. 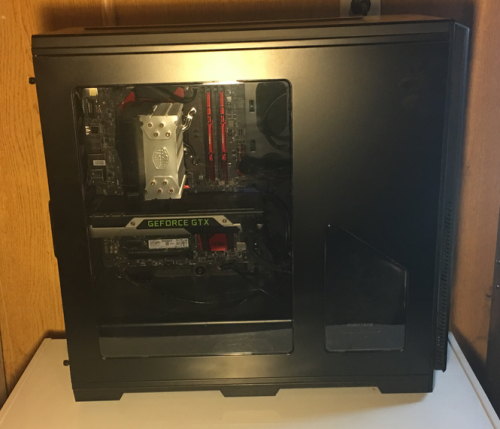 Lousy photo aside, I hope you will agree that it is a beautiful beast.

On the other hand, it weighs THIRTY POUNDS empty and is, quite honestly, a bear to move around.  Since I have moved to using m.2 SSDs and rarely use an optical drive for anything, it’s kind of overkill.

Also, while it has front panel ports for headphones and USB, they’re behind a little flip-up door and the Bluetooth adapter I always have plugged in for an Xbox One controller means that the little door is never closed and this drives me MAD, DO YOU HEAR ME, MAD.

Enter the NZXT S340, a somewhat more modest hunk of steel and plastic.

The S340 is… well, it’s a mid-priced case and is definitely not in the same class as the Phanteks as far as construction quality and ease of work go.  It’s also fifteen pounds lighter and fits under my desk a lot more easily.  It CAN hold 2 2.5″ SSDs and a 3.5″ HD, but don’t even suggest an optical drive.

Having said that, it easily swallowed my GTX980 and had plenty of headroom for the Cooler Master Hyper 212 EVO CPU fan I have installed.  It’s not cramped.

…well, the motherboard screw at the top left of the case, that was not easy to get in.  I eventually wound up resting the screw on top of its hole with a pair of needle-nose pliers, then carefully reached in with a screwdriver to get it seated.  Also putting in a power supply is a little weird, there’s a back plate that you detach from the case and screw to your power supply before sliding the whole thing back in.  Look, there are a few compromises to make here is the point I’m trying to make.

Anyway, when your storage is mounted directly to the motherboard and you only have to install a graphics card, it takes very little time to swap cases.  It took maybe an hour before it was ready for its inaugural powering-on test, and I was confident enough that I hadn’t screwed anything up that I even put the case sides on before doing that.

The case fans are always-on and not controlled by the motherboard, so I’d recommend having it under a desk to cut down on some of the hum if fan noise bothers you.  You can mount PWM-controlled fans of your own, of course, but the ones that came built-in seem to blow cool air pretty nicely so I will deal with the hum.

Once it was up and tested, the last step was to add a logo.  Computer cases USED to always have a little square indent for PC builders to put a sticker in, but that’s a trend that seems to have gone away.

So mostly I just find a flat spot to stick this on.  It came off an Atari 800, has been stuck on every PC I’ve built, and somehow the 40-year-old adhesive is still strong enough for it to stay in one place.

All assembled, it is a lovely black monolith.  Sadly this angle shows that my cable management, which WAS doing quite nicely only a few months ago, has kind of slipped and I really need to get things tucked up again.

So, a weird project in some ways – the Phanteks case is decidedly higher-end, so this is a downgrade from some perspectives – but a good project overall.  Moving my PC from my office to, say, the living room for some big-screen gaming was a SERIOUSLY non-trivial event at its previous size and weight, and this one will lug around a lot more easily.

It also feels like a much more modern case.  I’m going to be using the Phanteks to re-home my video encoding system, which needs lots of room for spinny hard drives, but a gaming PC can get by with much more modest storage demands.

Also the USB ports are not behind a door so there is nothing to make me twitch when I look at the front of the case. I swear that’s not the only reason I did this.  Honest.