On The Dangers Of Trusting Travel Apps

Part of my prepping for Beijing included installing the offline TripAdvisor application on my HiSense tablet, and it turned out to be both stunningly helpful and fiendishly traitorous.

To wit: It was marvelous at looking up hotels and restaurants and attractions and the like and it was top class at pulling up a map of the neighborhood and putting a GPS marker for where I was and another marker showing the location of the place I wanted to go.

The DESTINATION marker was invariably about six blocks east of where the actual place was, and a block or two north in the bargain.  This only seemed to affect restaurants and hotels and such, mind you.

As an example, in the following image, the red arrow indicates the ACTUAL location of the Jade Garden Hotel.  For extra confusion, there IS a hotel roughly where the TripAdvisor arrow is pointing.

And the red arrow in the next image shows where the Beijing Hooters really is: 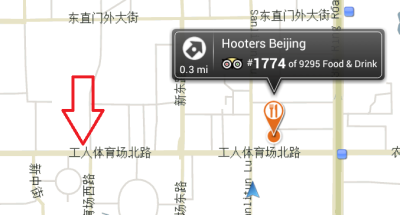 The only benefit I realized from this, before i realized that I wasn’t actually crazy and that my tablet was actually trying to kill me, was that I made my Fitbit happy by racking up a phenomenal number of steps.

This odd offset seemed confined to the Beijing version of the TripAdvisor application.  I also had the Shanghai version with me and those maps seemed perfectly accurate.

Glitches aside, I would have been completely lost without the app, so this isn’t a sincere rant – more a good lesson for me in not blindly trusting technology.  It also made me very glad that I’d decided to drop $129 on the particular HiSense tablet model I have back when ArsTechnica was talking them up as a viable Neuxs alternative; it paid for itself on this one trip alone.

The other travel app I put on it was Kiwix, an offline Wikipedia reader, and the complete archives of Wikitravel.  I cannot recommend this enough as a suggestion.