This post represents me FINALLY running out of food photos.  I really didn’t eat that many notable things in China, come to think of it.  When I wasn’t experimenting with familiar fast food chains I mostly lived off street vendor cart food and the occasional trip to Hooters.

Yesterday’s Sahara Grill Chicken Burger was barely notable.  It was spicier than your average McDonalds fare, but wouldn’t have been TOO out of place as a seasonal menu item.  They’d probably call it the “Tex-Mex Chicken Sandwich” or some such.

Today’s Bacon Lettuce Tomato Double Beef Burger was, well, it legitimately would have blended right in with the rest of the menu in a US McDs. 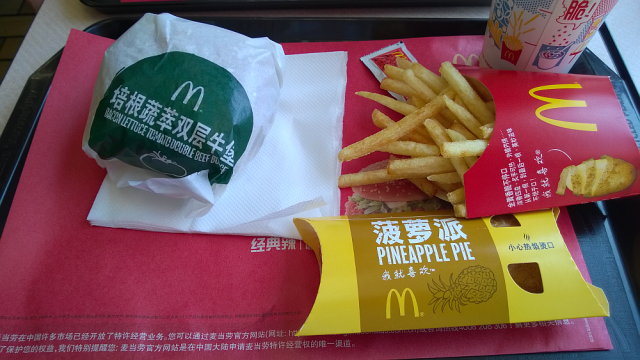 It did have a round slice of back bacon rather than the bacon strips I’d expected, and the sesame seed bun was covered in both black AND white sesame seeds, but really this would go unnoticed if they stuck it on the menu here.

On the other hand, the pineapple pie was a little bit unusual and VERY tasty.  It did, of course, explode all over my hand on the first bite, but that’s only because – despite my wife’s best efforts to train me out of this – I cannot help but take foods completely out of the wrapper before eating.

What WAS notable about this particular McDonalds, however, was that they had a glass display case with all sorts of happy meal toys on display, including these charmingly low-fi DC Comics figures.

Thankfully, these were not the current happy meal toys.  If they HAD been, I would have immediately started buying Happy Meals until I at least wound up with a blocky GL and Flash to take home, if not a complete set.

It took me an embarrassingly long time to realize that the character on the far right is Catwoman, by the way.  I admit this with shame.

In my defense, the other five are superheroes.  If there had been a more even mix of heroes and villains, I like to think I’d have gotten it straightaway.

2 Responses to One Final American Fast Food in China Post