I like the sound of that.  The Forbidden City.  Sounds rather like a Tomb Raider level, doesn’t it?

At any rate, the Forbidden City, also rather boringly known as the Palace Museum, is a collection of former imperial palaces at the heart of Beijing and I kind of felt compelled to go and see it while I was there.

I was not allowed to grapple or parkour my way across any of the exhibits, so the similarities to Tomb Raider end at the name. Also I was not attacked by husky-sized spiders, which was a plus.

Getting into the Palace Museum is fantastically cheap, because the thing is a national heritage and they don’t want to price it out of reach of someone who has just come in from the country on his life’s one trip to Beijing. Standing in lines is therefore necessary, but once you’re inside there is a lot of stuff open to you to wander around and look at. They don’t open the entirety of the grounds, mind you, and most of the buildings are only accessible inasmuch as there are viewing windows that you can look through to see the thrones and so on, but you’re allowed to visit some of the lesser buildings and see things like royal bedchambers etc.

A second fee gets you in to see small selection of “imperial treasures”, and the items on display were kind of meh-worthy, but this fee also lets you into some of the small back gardens to wander at your own pace or to sit down and relax.  There was also a Hall of Clocks which sounded neat but which was closed for renovation or cleaning or just because they felt like it was the Day You Don’t Get To See The Clocks, Filthy Foreigner. 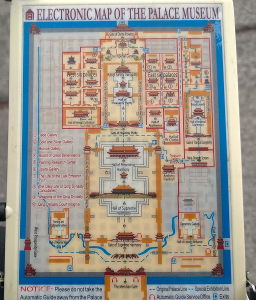 On the way in, main gate attendants will cheerfully rent you a portable audio tour thing, and it’s lightweight enough that you might forget you’re wearing it until you get close to a significant building or display and it springs to life with a description of what you are looking at. The English version of the audio guide also has quite a few anecdotes about the various displays; it was less dry than I’d expected and I was glad I’d decided to take advantage of it.

Like a lot of China, actually seeing some of the more popular exhibits involves being very pushy. EVERYONE wants to look through the observation windows and gawk at the throne rooms, and there is no such thing as a polite queue.  I’m a hair over six feet tall and a good hundred kilo, so I am usually very careful NOT to shove when I’m in crowds, but it turned out to be a distinct advantage in actually getting to the front of the crowds and I got a lot of neat photos.  Sadly, without the audio tour barking descriptions in my ear, I can’t remember what some of them are photos OF, but I got some neat photos anyway.  That kind of sums up my tourist experiences in a nutshell, come to think of it.

There’s something cool about these dragons.  I can’t remember what it was.  Something about one of the tiles is made of wood instead of ceramic and there’s a bunch of stories about why that is.  Um.  I miss my audio tour.

I don’t have a lot to say, really. It’s a fantastic collection of old palaces and you can wander around it for a reasonable price. If you’re visiting Beijing, you’re presumably going to go see the thing even if there WERE husky-sized spiders. I did get waylaid by one person and dragged into the back room of one of the gift shops to see her assortment of scroll paintings “Half price! Today only!”, but that just kind of fades into the background noise of being treated like a wallet on legs.

I also kind of wish I could have visited the palace cats. Apparently there’s an edict that any cat that comes to the forbidden city must be fed, so it is a place of last resort for a family that has to give up the family pet for some reason and they have a huge collection of cats as a result. Sadly, that was not one of the areas open to visitors.

I will leave you with a picture of the most secure cistern in all of China.  I am not precisely sure why this one gets the extra security, but nobody is messing with it as long as these guys are on duty.