I built a thing.

Posted on August 1, 2014 by baudattitude

So, there’s a line of building toys called Nanoblock, similar to Lego but much much smaller.  The smallest pieces are just 4mm x 4mm, or a quarter of the size of the lego “1×1”.  Most of their kits (well, at least most of the ones I’ve seen) are blocky versions of various world landmarks, animals, trains, that sort of thing.  The nearest Japanese bookstore carries some of their kits, but they’ve never had the Tokyo Tower kit in stock and anyway they want like 20 bucks for one of the small kits, which just seemed like a little too much import markup.  There are sellers on Amazon that DO have the Tokyo Tower kit, but again they want like 20 bucks for it.

Here’s the thing I’m talking about, for reference: 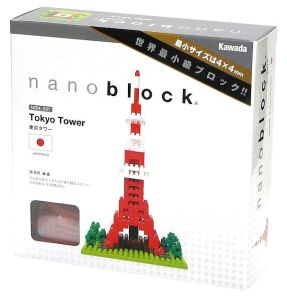 Anyway, I’ve been wanting this kit for a couple years now but grousing about the price for just about as long, so I made sure to pick one up at Loft in Tachikawa when I had the chance.  It has the bonus property of being work-appropriate, which I can’t say for most of the stuff I bring back from Japan.

It was a lot of fun to put together, though the sheer number of tiny tiny pieces was a bit daunting at first.  These things are small, and the instruction sheet for even a very small model like this one has a lot of steps.

My first surprise was that it went together on the first try, even if it took the better part of a half hour.

My second surprise was that there were something like 40 pieces left over.  The company that sells these kits is apparently very aware that they are selling you a box full of tiny tiny pieces and have chosen to stick at least one, often two extra of each kind of piece in the box so you don’t have to beat yourself up too badly if you lose a block in the rug. 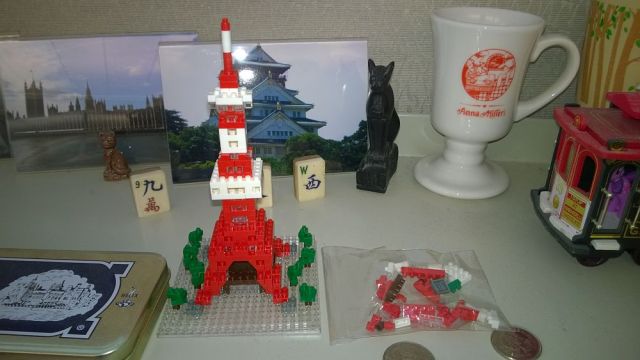 So I have a blocky representation of Tokyo Tower now, a deep appreciation for the effort it takes to put together any of the larger nanoblock kits, and I’m slightly more inclined to put together more in the future knowing that they have a built-in safety feature in the form of spare parts.

Oh, and I won’t fuss nearly as much about import prices from now on.  The savings from flying to Japan, finding one of these in a store, and needing to make room for it in my luggage on the way home?  Less than five bucks.  I guess the importers aren’t marking them up THAT badly.

2 Responses to I built a thing.