I can’t really recommend Springfield, Oregon to anyone.

That is to say, there’s nothing you can really point to about the town and say, specifically, that this or that other thing makes it a bad place to live or visit, there’s just a sort of gloom to the place, a sense of being overshadowed by its neighbor to the west in ways large and small.  It’s the place you live if Eugene is just a little too expensive, or if you would just rather not be around the stuck-in-the-60s attitude that still lingers there.

It’s the urban personification of ennui, really, the grey Sunday afternoon when you don’t really know what you want to do with the rest of the day but can sense Monday creeping up.

And, it’s the kind of place where you might stop for lunch, driving from points south to Portland with two hours of I5 in front of you, realize that you’re tired and maybe a little self-destructive and order yourself a sandwich made entirely of meat. 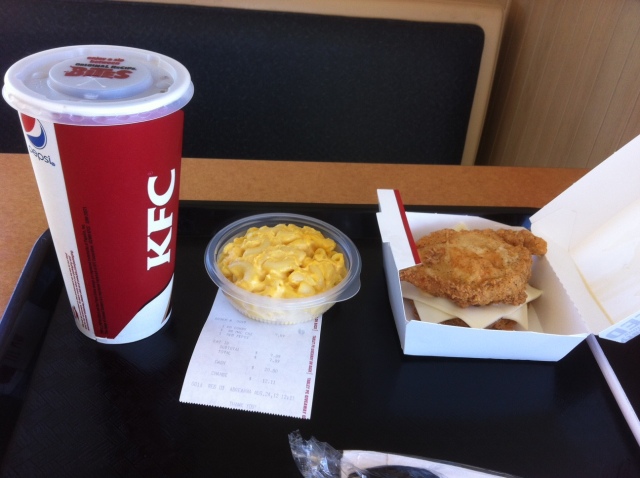 It’s almost passé now to make fun of the Double Down.  It had its brief moment of fame as an April Fool’s joke, followed by an advertising blitz that implied heavily that the sandwich in question was available only for a limited time and you should throw caution to the wind and get one while you can.

Oh, and they paid college-age women to walk around with ads on their butts:

At some point, the controversy and fervor died down and it quietly found a home on the regular menu, occupying the number eleven spot just above the Famous Bowl.

It makes it easier to order that way, really.  You never have to vocalize the fact that you want one of these things, you just have to confidently order the number eleven and tell yourself that the people behind the counter won’t judge you, can’t judge you, they’ve seen worse and lived to tell the tale.

This is probably true, actually.

There seems to be an art to eating a sandwich with no bun, and I fear that I missed the finer points of it to start.  I made the mistake of unwrapping and biting in and paid with a burned mouth.  This isn’t being cooled by being covered with mayo and shoved into a bun, it’s fried chicken patties directly from the boiling oil.  You need to let it steam and fume, let it expend some fraction of that heat in melting the cheese and warming the bacon, give it time to breathe.

Then, once it’s safe, you can eat it. Self loathing is normal here, but you can also pretend that you are eating it ironically.  It’s OK.

Ironically, it’s not all that terrible for you, at least in terms of raw calories.  Ditching the bun also means ditching an awful lot of empty carbs.

Now, in terms of fat, sodium and all kinds of other things you’re not supposed to have anymore… well, it’s not great there.

The only thing I can really say AGAINST the sandwich, apart from burning myself on it, is that it’s not really all that filling.  It would be easy to finish one, decide that you’ve got room for more, and order a second without considering the horror you are about to inflict on your stomach.

Still, even if you are stuck in Springfield for lunch, even if you’re actually stuck in the town on a rainy Sunday afternoon, even if you CAN feel Monday breathing down your neck and know that you are going to waste the rest of your day and go to bed with a vague sense of dissatisfaction that will take half the week to fade…

…you should probably stop at one.