Tony Stark made me buy it.

A couple of weeks back, I had occasion to go down and wander around my university’s campus.  It’s only been a year or so since I graduated, so there honestly haven’t been a lot of changes, but I did notice that the Mediterranean restaurant near campus had replaced its kebab special – which had remained unchanged for the two years I went to school – with a schwarma special.

I’m not going to come right out and say that this was a direct result of the gag in the Avengers, but I’m going to point out that the timing is rather coincidental.

Anyway, since I was, thanks to the Avengers, rather curious as to what schwarma actually was, I went back yesterday to see for myself. 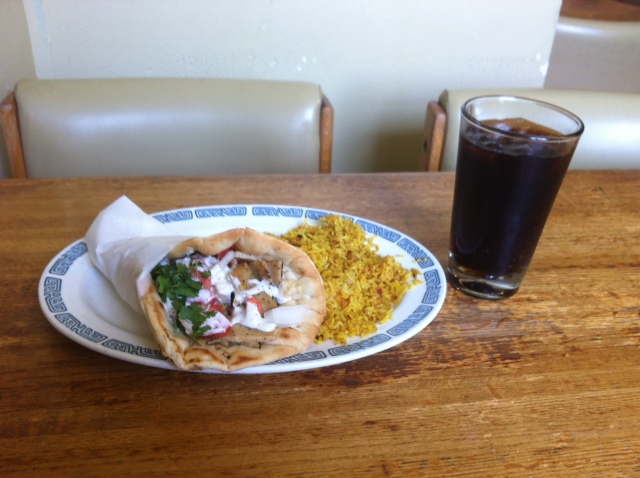 Turns out it’s basically meat and veg in a pita with a nice tangy sauce, very much comfort food and something I’ll get again.  Sure, it’s become a bit of a meme, but if you’re going to eat memetic food anyway, better this than bacon.

Apart from feeling like I’d had a good lunch, this had one other effect on me – it reminded me to go and check the Wikipedia page for schwarma, which has now become my go-to page for pointing out just how silly Wiki’s editors can get.

See, immediately after coming out of the Avengers, this is the page I went to in order to find out just what this schwarma thing WAS, and I was amused to see that someone had already added an “In Popular Culture” thing with a one-sentence mention of the gag in the movie.

A couple of days later, I was chatting with a friend who mentioned that he’d done the same thing but that there was no such mention on Wikipedia.

Fortunately, Wikipedia keeps detailed edit histories, which I went back and read through.  This is the geek equivalent of getting a prime seat on the sidelines at a hair-pulling-sissy-fight-tournament.

If you’re anywhere near as geeky, I recommend doing the same thing.  Basically, there are one or two Hard Working Editors dedicated to Keeping the Schwarma Page Pure who have been trying to Beat Back The Heathen Masses ever since the Avengers came out.  This fairly insignificant page devoted to a fairly obscure bit of fast food has become an Edit Battleground of reasonably epic proportions, with one particular editor being so pedantic about everything needing to be sourced that it has, as of this writing, FIFTEEN source links for a single page worth of text about schwarma.

It’s a thing to bring tears to your eyes.  Bring popcorn.  Or, I guess, schwarma.