They should fill more things with custard.

OK, I know that line is taken pretty much straight from a Penny Arcade strip, but I think it’s good words to live by.

Today I would like to tell you about things that are filled with custard.

But, first, some expository buildup.

My first trip to Japan was at the end of 2005, and back then I wasn’t really prepared for it. See, I’ve never been one of those fanboys that tries to do the whole “lifestyler” thing – so I don’t have, for instance, tatami on the floor or futons in a closet.

We do have a rice cooker, but my wife had it when I married her so I take no responsibility.

Sure, I’d gone out for Japanese food a few times, but I didn’t really know anything beyond tempura and tonkatsu. People would say things like “Oh, you like Japanese stuff? You must love sushi!” and I’d have to admit that I’d never tried it.

This had embarrassing consequences when we went there.  I really didn’t know what to eat, and so I spend most of our vacation steering us into such fine restaurants as, oh, McDonald’s, and TGIFridays, and Shakey’s Pizza Buffet… It was pretty shameful. I will admit this.

We were there over the New Year, and on January 1st we decided to go and see Shinjuku because we hadn’t been there yet.

It was freaking cold, too, shall I mention that? It might have been below freezing, but I’m not going to swear to that.

Anyway, being New Year’s day, there are a lot of Japanese going to shrines, and so there are little carts selling food at the pedestrians.

My wife, who is much braver than I am, and who was a little annoyed throughout the entire trip by my constantly steering us into American restaurants, stops at one of these carts and buys something that looks a bit like a hockey puck. Neither of us knew what it was, but it smelled good and it was hot, which was important because we were both, as mentioned, really really cold.

She gets me one, too, and biting into it was like finding religion. It was, basically, a little pancake full of hot custard, and it was glorious.

We each had, oh, three or four before it started feeling embarrassing going back to this little cart and asking for more.

When we got back to the states, I started trying to figure out what it was we’d eaten. It wasn’t easy to find search terms without knowing what the name of I’d eaten, but eventually something like “shinjuku custard” worked to lead me to a blog talking about some guy’s favorite “Imagawayaki” stand in Shinjuku… possibly the very same stand.

Furthermore, googling “Imagawayaki” lead me to images that confirmed that they were what I was looking for.

Then I found out that the local Japanese market sold frozen microwavable Imagawayaki, and now they are a winter tradition.

They are outrageously priced (a package of five is a little over seven bucks), but they are so very worth it.

I have included a picture for your benefit, and because it gave me an excuse to make two and eat them. 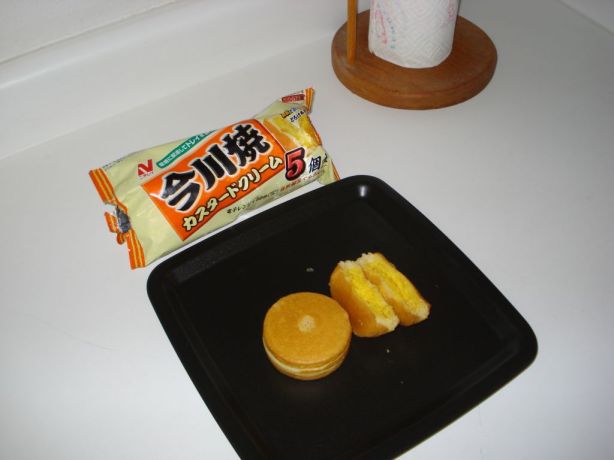 …they come in “red bean” flavor, too, but I’m not as much of a fan of red bean. I do like me the occasional taiyaki, but that’s about it.

Oh, and, yes, in the last two years I’ve managed to become a LITTLE more brave about Japanese food. My last trip there, I ate at McDonald’s exactly once, and then only because I really wanted to see what a “McPork” was like. 🙂