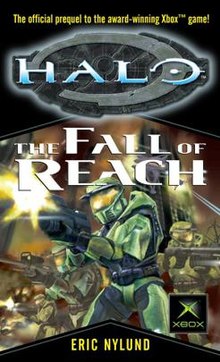 So, Halo Month is off to quite the start. I’ve read the first three books (“Halo: The Fall of Reach”, “Halo: The Flood”, and “Halo: First Strike”), played through the MCC version of Halo: Combat Evolved, and started Halo 2.

As mentioned before, a big part of why I’m doing this is because I’ve never really paid attention to the Halo universe outside of the games, and that made following Halo 4’s plot very confusing – a lot of it revolves around Doctor Halsey, who I don’t think ever shows up in a Halo game before that point but who is hugely important to the book plots from the very first book forward.

I can’t really talk too much about the quality of the books. They suffer a bit from the need to lovingly describe the various weapons and gear used by the Spartans, and it comes off a bit… men’s adventure? Like, there’s a drugstore action novel feel to them, with all of the talk of calibers and high explosives – and to make things worse, some of the technical talk is just painful. There’s at least one moment where a character is described as using a “114mm sniper rifle”, for example, which I am going to pretend is just a really interesting typo.

Let’s just file them under not-great-literature and move on.

Two of them are basically lore dumps to get you into the first game and then to explain how one of the characters in that first game survived until the second. The middle book, “Halo: The Flood” is little more than a novelization of the game storyline, which was quite a disappointment. I had expected it to go into, well, the backstory of the Flood. Silly me.

Of all of them, I think “Halo: The Fall of Reach” is the most critical to read and I kind of wish I’d read it before playing the game for the first time – some details from the page don’t perfectly match up with the on-screen events, but it really sets the stage and the stakes for the campaign.

I’d played Halo: Combat Evolved through twice before, both the original Xbox version and the Xbox 360 Anniversary edition, which was a good thing. It meant that I was ready for the godawful slog that is “Assault on the Control Room” and knew in advance that “Twin Betrayals” was just going to be “Assault on the Control Room” in reverse. What I didn’t remember was just how easy it is to get absolutely murdered by random chains of grenade explosions, or how painful breaking into the landing bay in “Truth and Reconciliation” was going to be. I was only playing on Normal difficulty, expecting a cakewalk, and I had to reset my expectations several times over the course of the campaign.

A lot of Halo’s campaign, after your first play-through, is just working your way to the Flood outbreak since that’s where the game really kicks into gear. It’s probably an unpopular opinion, but my favorite level is “The Library”, just because I really love the sense of being constantly almost-but-not-quite overwhelmed by hordes of enemies. It doesn’t have the same adrenaline rush as the final mad dash in the Warthog, but it keeps up the tension level for a really long time. It may be a bit linear, compared to other levels where Bungie was happy to let you get lost and wander around for a while, but linear works for me.

I suspect I have just insulted a lot of fan-favorite levels, and I’d be interested to hear other peoples’ thoughts on the campaign.  Be gentle. 🙂

The Master Chief Collection versions of both Halo and Halo 2 let you swap back and forth between the old graphics and new graphics with the press of a button, and I found myself switching quite a bit. Unexpectedly, I found myself preferring the old lighting in most of the levels – the ring is supposed to be ancient and long-dead, and the Forerunner ruins in the original game LOOK it. The fresh coat of paint added for the remaster kind of destroys the sense that you’re wandering through the remnants, like they spent a long time on retexturing everything and then realized that they needed to turn on all of the lights or you wouldn’t be able to properly appreciate the work they put into designing wall panels. 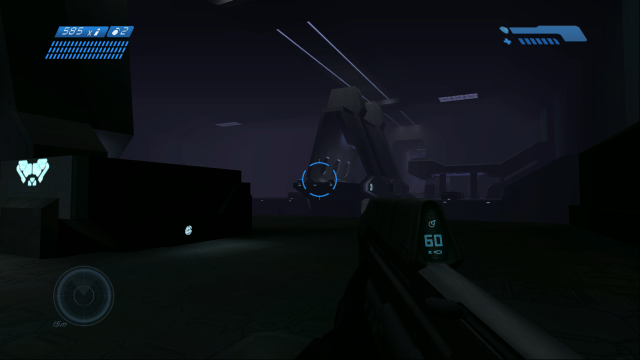 Also, the newly-added ground flora does a fine job of covering up ammo and weapon pickups, and one of the primary reasons I kept switching to the old graphics was so I could find stuff after fights.

That kvetching aside, the new models for characters and vehicles are far better and usually won out over preferring the older lighting. If they ever RE-remaster the original game, I hope they find a bit of a middle ground.

As I mentioned, I’m only a little ways into Halo 2 – specifically, at the point where the Master Chief actually winds up on the second Halo installation. So far, I’m liking the changes to the visuals much more than in the first game, and there is a real evolution in pacing – the opening level is a bit of a drag, especially since I managed to get lost several times, but everything since then has been firing on all cylinders.

Next up, I should finish Halo 2, then read one or two more books and dive into Halo 3. I also have Halo Wars waiting for me, and that’s going to be the first completely new-to-me game. I don’t have a lot of RTS experience so I’m a little anxious about that one, but we’ll see how it goes.